Characteristics
Fish are exclusively aquatic vertebrates with fins. Generally speaking, advanced species of fish have paired pectoral and paired pelvic fins, one or two dorsal, one anal and one caudal fin. They breathe oxygen dissolved in the water using gills (with only the lobe-finned fish, the Sarcopterygii, also having lungs).
Fish are divided into five classes: the Agnatha (the jawless fish), the Acanthodii, the Placodermi (armoured fish), the Chondrichthyes (or cartilaginous fish) and the Osteichthyes (or bony fish).
Only the Chondrichthyes (sharks, “rays”, etc.), Osteichthyes (trout, swordfish, eel, sea bream, sardine, etc.) and a few Agnatha (lampreys) survive to the present day. Osteichthyes make up the majority of extant fish.

Chronological distribution
The image shows the distribution of the different vertebrate groups over time.

The first fish, the Agnatha, appeared in the Cambrian, the other groups between the Silurian and the Devonian. The Acanthodii and Placodermi fish groups have since become extinct, leaving room for the evolution of the Osteichthyes and Chondrichthyes and a very few representatives of the Agnatha.

Their locations within the Geopark area
The oldest fish remains within the Geopark area date back 450 million years. These are the tiny mouthparts of jawless fish called conodonts, that are now extinct.
Worthy of note are the fossil remains of bony fish found in the Triassic outcrops. The faunas of the dark dolomites of the Norian (the Upper Triassic) that emerge from Villa Santina to Forni di Sopra are particularly rich in specimens, with a greater abundance along the Rio Seazza and Rio Forchiar (Preone) and in the Caprizzi area close to Ampezzo. 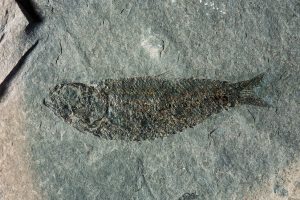