The Italian legislation classifies the mining activity, according to the type of "cultivated” material, as:
1. Quarrying activity: when it concerns the removal of construction materials, for industry and ornamental stones of local importance;
2. Mining activity: when it concerns the removal of materials of high value and strategic importance such as metal ores and fuel.
In common parlance, mining is associated with an underground activity and quarrying as an open-cast activity; in reality nowadays, thanks to the availability of new technologies for excavating and supporting voids, environmental recovery interventions and a different sensitivity towards the landscape, quarrying is increasingly taking place underground. 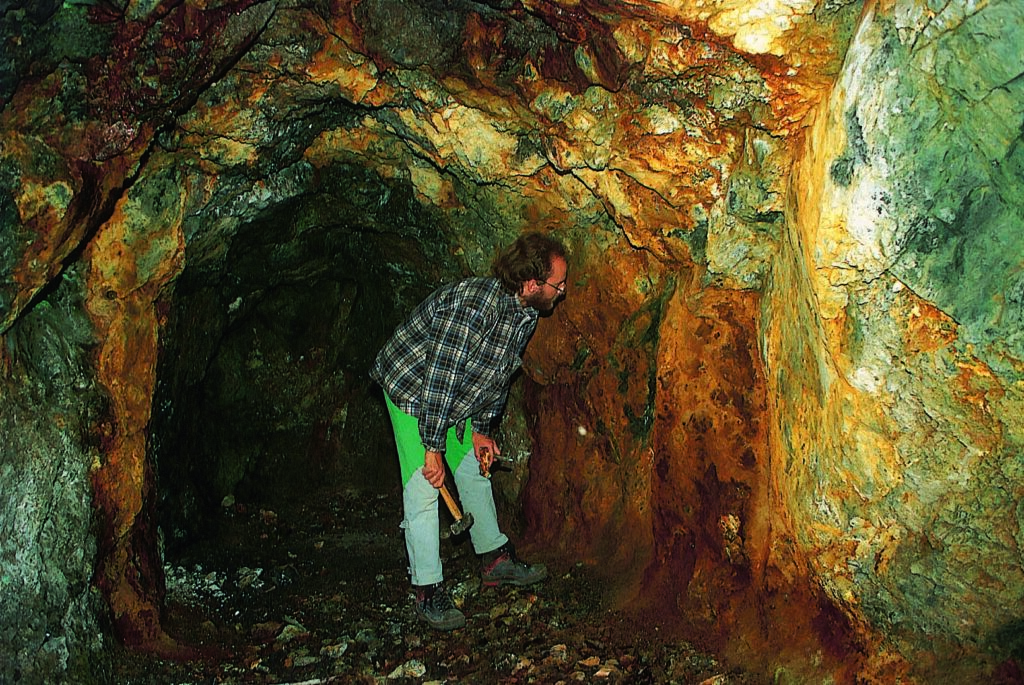 EXTRACTION ACTIVITY in the Geopark area

The Geopark area has been exploited to obtain raw materials since ancient times, probably already during prehistoric times and in Roman times, but mining activities became significant in the Middle Ages.
The oldest written testimony relating to a mining exploitation concerns the mines of Monte Avanza (Forni Avoltri), when in 778 the Duke Franco Masselio donated a village called Forno with all its pertinences, including the mines of iron and copper. Other concessions followed in the thirteenth century in the area of the Canale di Gorto and in the area of Forni Avoltri. Considerable boost to mining research was given by the Venetian Republic which, in Carnia, procured minerals to supply the arsenal. Minerals were also sought to be used for minting. 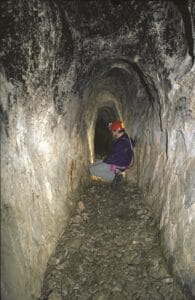 Today all the mines are exhausted or closed because they are not very profitable, but important traces of this activity have remained in the area, which have become the object of research by many scholars. The toponyms (such as Rio Malinfier, Rio Miniere, Rio Pistons) and the legends also testify to a millenary mining activity.
On the other hand, several open-air quarries are still active for the extraction of limestone of great commercial value and chalk.

MINES AND MINING SITES IN THE GEOPARK AREA

In Carnia there are numerous areas where minerals or fuels were extracted in the past.

In most of the areas being exploited, only small and mostly superficial excavations and tunnels can be seen; however, there are sites where the activity has continued, albeit occasionally, for centuries and therefore in these places more important structures can be noticed even if rarely well preserved. 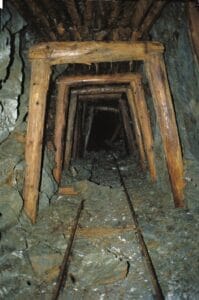 Among the metal mines, that of Monte Avanza is the oldest evidence of mining exploitation in the whole Friuli Venezia Giulia region. Its activity is indeed documented as early as 778. The mineralisations are localised along the contact between the Devonian limestones and the clayey-schist complex of the Carboniferous. The extracted minerals were silver and copper as a by-product. The war events of 1944-45 put an end to research and exploitation, also due to the reduction of the mineral available and the high extraction costs.

Timau (Paluzza)
The mining activity in the mountains around Timau, where silver and copper were extracted from the Paleozoic rocks, can be traced back to the late Middle Ages. The only remaining testimony of this mining activity is a tunnel in the area of the Pramosio Quarry where today the “Grigio Carnico” is extracted. 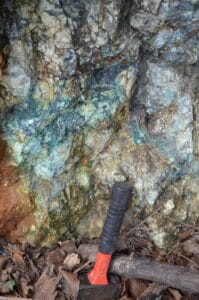 The historical evidence of the mining area of San Giorgio di Comeglians is rather scarce. Traces of medieval activity were found in 1940, when investigations were carried out to estimate the potential of the deposit. The mineralisations are localised in the belt between the Silurian deposits and the Devonian limestones. The most abundant mineral that was extracted was barite (mineral containing barium).

Val Aupa (Moggio Udinese)
Fluorite (a very common mineral composed of calcium fluoride) was extracted from the mineralisation of Val Aupa, present in Rio del Fous and Rio dell'Andri. There is no certain evidence of a mining activity, although probably occurring, prior to 1872; on the other hand there is a reliable and continuous documentation from 1925, when the low mines were abandoned and the works were concentrated at higher altitudes. Over time, periods of production and research have alternated with periods of complete inactivity. 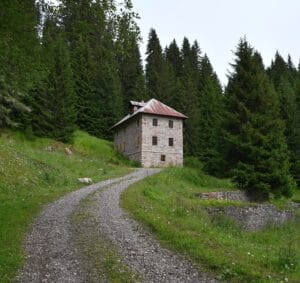 These mines, located near the hamlet of Ugovizza, were of great importance for the development of the Val Canale from the 15th century to the First World War. During the period of domination of the Venetian Republic, the iron extracted was imported and worked for the production of tools for logging and agriculture, and for the production of weapons. During the Second World War, the strategic importance of the Monte Cocco mines was such that Germany kept this portion of the territory under its direct control.
The end of the activity of these mines occurred in 1946 with the dismantling of all the plants. Only a brick building remained of the mining village. In the following years, new studies were conducted but with unsatisfactory results. Now many tunnels have collapsed, some can be entered with difficulty and danger because the beams are in poor condition and the debris is pressing on the infrastructures.

ACTIVE QUARRIES IN THE GEOPARK AREA

District of Forni Avoltri
Cava Avanza is characterized by the production of "Carnic peach blossom”, Commercially called, erroneously, marble; in fact it is not a metamorphic rock but a sedimentary rock dating back to 400 million years ago. It has a light gray-whitish color, with delicate pinkish-purple spots due to hematitic-manganese-bearing pigmentation. In the district is also mined the ”Gray Carnic, consisting of compact limestone, slightly metamorphosed, with a basic shade from gray to light gray with numerous light veins of calcite and dark carbonaceous material. 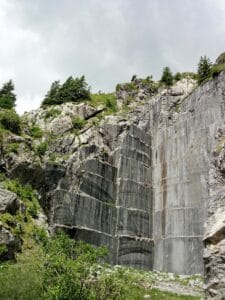 In the quarries of Pramosio and Valcollina-Portocozzi the “Grigio carnico” is extracted. The Valcollina-Portocozzi quarry was opened in the early 1960s and closed after about 25 years of activity. In 2010 it was re-authorized and mining resumed.
In the Koul Troten quarry, located in Laghetti di Timau, the "Onyx red", Consisting of a limestone belonging to the formation of" Pelagic limestone with climenias and goniatites ", therefore rich in ammonoids and dating back to the Upper Devonian - Lower Carboniferous. It owes its name to the presence of well-developed bands of reddish color alternating with bands of gray color, all crossed transversely by veins of white calcite. It is a material that differs from all other materials extracted in the region due to its chromatic characteristics.

View more Cava of Pian di Zermula (Paularo)
Also at the Cava Pian di Zermula the "Carnic gray ". In the area of the current quarry there was a previous mining activity which ended in the 60s, 70s of the last century. The authorization for the reactivation and environmental restoration of the old disused quarry dates back to 2015. 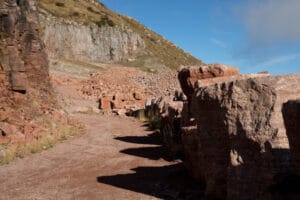 One of the best known products in the Carnic region is extracted in the Verzegnis mountain range, near the top of Monte Lovinzola, at 1700 m asl. It is a clearly stratified red-brown limestone from the lower - middle Jurassic, rich in fragments of crinoids and ammonite and belemnite shells. The strong colour is due to hematitic or limonite pigmentation. In the past, different varieties of marble were extracted: “Bruno Vermiglio”, Fiorito Porphyry, Bruno Porphyry and “Noce Radica”. Currently, only the latter is extracted, known also with the commercial name “Rosso Verzegnis”. 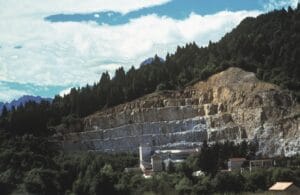 In the Entrampo Quarry (in the Municipality of Ovaro) no ornamental or construction stones are extracted, but rather gypsum for industrial use; these gypsums belong to the Bellerophon Formation of the upper Permian.

Geosites in the Carnic area related to mining sites

If you want to know more Geosites