The Canal del Ferro – Val Canale Ethnographic Museum is the indispensable starting point to get to know the Valcanale, its history, its traditions, its splendid nature and, last, but not least, the geological history of this territory. A trip to the Museum in Malborghetto means undertaking a fascinating “journey” through geology, palaeontology, natural science, history and ethnography, carrying out an in-depth study, also through dioramas and slideshows of great beauty, aspects regarding the Tarvisio Forest – the largest Italian state forest – and the ancient, vital traditions, result of the convergence of the three great European cultures: Latin, German and Slavic.

The halls dedicated to the history of the Earth illustrate, in particular, the numerous palaeontological findings in the local area as well as the characteristics that in the recent past have made this terminal section of the Carnic Ridge also a mining site of the utmost importance.

The Museum is situated in the so-called “Palazzo Veneziano”, a suggestive historical building.

In fact, in the years after 1591, Giorgio Paul, was responsible for the construction of this building; he was a leading figure of an entrepreneurial family originating in Gemona del Friuli, devoted to the trade and processing of iron in the several local forges and smithies. Many members of the family abandoned Malborghetto during the Counter-Reformation for religious reasons.

In 1646, as a consequence of the wedding of Paul’s last descendant, the ownership of the building and the vast property associated with such was inherited Canal family of Villaco. Since then, the building has been known as “Palazzo Veneziano”, because during the course of 230 years it was the home of the rich Canal family, the name of which betrays its evident Venetian origins.

In 1881, once it was no longer used as the residence of wealthy families, the palace was turned into a hotel. The creator of such was the mine owner Gaetano Schnablegger of Tarvisio, who was involved in several sectors, including the valorisation of tourism in Valcanale. With systems that were considered state-of-the-art at that time, such as showers and sulphurous water baths, it immediately became a hotel of reference for the nobility and wealthy members of society between Vienna and Venice.

The palace continued to be a hotel until World War II and then, for a few decades, it was used as a summer camp. In 1982, it was purchased by the Canal del Ferro – Val Canale Mountain Community and is now the venue of the Ethnographic Museum and documentation centre. 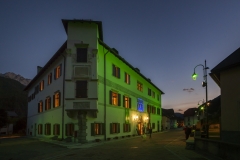 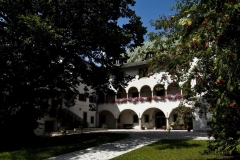