The Carnic Alps Geopark Visitor Centre guides the visitor to discover the geo-palaeontological peculiarities of the Upper But Valley.

The exhibition itinerary starts with an overview of the sites of geological interest (Geosites) of the Carnia area, to move onto dealing with detailed information on the uniqueness of the But Valley, choosing water as a common thread throughout the itinerary of the visit.

Then, there is the description of the Mount Cogliàns Massif, bearing witness to one of the most important coral reefs on a global scale, which developed during the Devonian era (approximately 400-350 million of years ago), with the majestic limestone outcrops of Creta della Chianevate, Chialderate, Monumenz, modelled over time by the erosive action of quaternary glaciers and by Karst phenomena, of both a superficial and underground nature.

A space is devoted to the numerous natural sinkholes and Karst grottoes that open in the limestone massifs of the Upper But Valley, some also used during World War I for warfare purposes. In addition to these, there are also some artificial sinkholes: from the ancient silver mines, now abandoned, also dating back to the 16th century, to the “Grey-Karst” open-air quarries that are still active.

The itinerary concludes with the description of the Karst spring of the Fontanon di Timau, a natural resource that the local community has skilfully used in a sustainable way, not only for drinking purposes, but also for the production of hydro-electric energy, in this way favouring the economic development of the valley.

Suggestive images of alpine landscapes, majestic peaks, valleys and lakes of a glacier origin accompany the visitor, who can immerse him/herself in the sounds and colours of the mountain thanks to a multi-media area created in the centre of the exhibition itinerary.

The installation includes multi-media equipment, interactive workstations with 3D models of geological sections of the area as well as a workshop area devoted to educational activities.

The exhibition itinerary, developed on one floor, complies with accessibility requirements and has descriptive panels also in English and German. 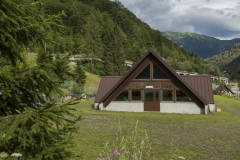 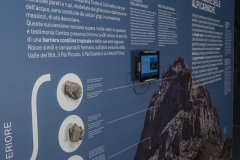 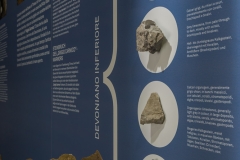 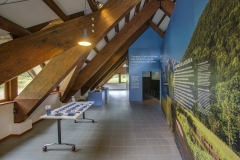 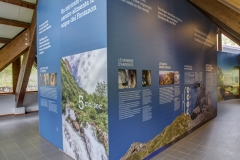 The Visitor Centre is closed during the winter season. For information please contact the Geopark office.